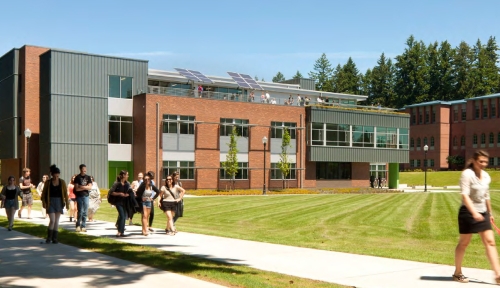 Launched in 2010 and completed in 2016, the Engineering Initiative campaign to raise funds for the completion of two, state-of-the-art buildings to support engineering education at Saint Martin's: Cebula Hall and Panowicz Foundry for Innovation.

Saint Martin’s first engineering programs were approved in 1940 and gained traction in the post-World War II years. For many years, Father Richard Cebula, O.S.B., an inspiring professor and a monk of Saint Martin’s Abbey, guided the programs and established their reputation for excellence.

The University’s engineering programs are rooted in the Benedictine Catholic tradition of holistic education. Saint Martin’s engineering students receive in-depth professional education, as well as a solid base in the liberal arts, graduating with a strong foundation of general knowledge to support them in their careers or in advanced engineering studies. Students enrolled in the programs have long competed successfully with their counterparts from much larger schools. Among the honors brought home by the University’s engineering students was a recent national second place finish in the PCI Big Beam Contest.

Completed in 2012, Cebula Hall houses Saint Martin’s engineering labs and features unique collaborative work environments for students to maximize their educational experience. This building, recognized as the highest-rated LEED Platinum project in the United States, incorporates a number of building learning features that exhibit systems relevant to all our engineering programs. It is one of the highest-ranked LEED Platinum certification in the world; saves energy through geothermal and solar sources; and uses less than half of the water of a non-LEED certified building of the same size.

The 17,363-square-foot facility provides laboratories and design space where the University’s engineering and computer science students can apply what they have learned in the classroom to generate, test and evaluate designs, explore possibilities and gain hands-on experience as they work toward their degrees. Its name reflects the generosity of two major donors, University Board of Trustees Vice Chair A. Richard “Rick” Panowicz and his wife Pam and the E. L. Wiegand Foundation.