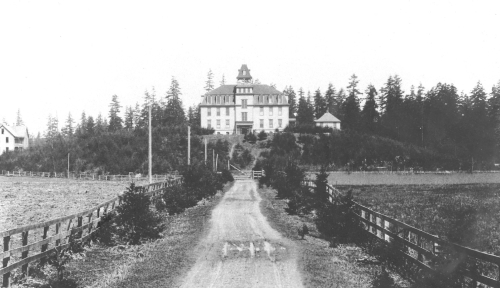 Through decades of change and growth, the University has held true to its Benedictine values – community, hospitality, stewardship, listening and dignity of work, among others – which remain central to life at Saint Martin’s.

1893 - The site of the University and that of its founder, Saint Martin’s Abbey, is selected by Abbot Bernard Locnikar, O.S.B., of Minnesota's Saint John's Abbey, Saint Martin's Abbey’s mother house. The location sits on 300 acres of peaceful woodlands, meadows and meandering trails.

1895 - Work begins on Saint Martin’s first building in January, and a four story structure housing both the school and a monastery are completed by late summer. Saint Martin's opens its doors Sept. 11, 1895 for a single student, Angus McDonald, who reportedly travels by canoe from Shelton, some 25 miles away. He is joined by several more students in the following weeks, but until their arrival, receives a full course of high school level classes as the school’s lone enrollee. As with other 19th century American Benedictine schools, the new College enrolls mostly boys and young men between the ages of 10 and 20. Both boarders and "day scholars" are accepted and taught from a curriculum of preparatory and high school classes, plus classical and commercial college courses.

1910 - A "handsome, modern" ninety by forty-eight feet gymnasium is built on the flats on the east side of campus after 1909 fire. It boasts a full-sized handball court and can be used for basketball and indoor baseball.

1912 - Lacey's Benedictine monks approve in principle and initiate planning for a new and much larger building for the 17 year-old institution "to meet the need of proper acommodations" for an "increasing student attendance."

1913 - The new building is completed, with a full basement story containing scientific labs and lecture rooms as well as two social halls. On Nov. 16, the solemn blessing and dedication of the new building takes place and is described as "the largest gathering that [has] ever assembled in the little town of Lacey," with more than 500 hundred people signing the guest book.

1918 - The eight-foot memorial statue of the Sacred Heart of Jesus in front of Old Main is donated by the men participating in Saint Martin's first Laymen's Retreat (popular spiritual exercises held in Lacey every summer until 1956).

1920 - On Oct. 9, two thousand people hear a speech by Robert Bridges, Farmer-Labor Party nominee for governor who is denied use of the Olympia High School auditorium. No other hall in the capital city is large enough to accommodate the anticipated crowd.

During the Great Depression - The school closes its grammar school and focuses on developing its high school and college programs.

1932 - A forest fire threatens the campus and is "brought under control by the combined efforts of faculty and students."

1934 - In April, the Benedictine Monachist, edited and largely written by Father Sebastian, begins bi-monthly publication with the goal of stimulating further interest in Benedictine and religious matters.

1939 - Late in the fall semester, an aviation ground school class for 20 men is offered on campus in conjuction with Buroker-Hicks.

1945 - The College holds its 50th Commencement on June 8 with three College and 16 High School graduates. It also celebrates a joyful but limited observance of its 50th anniversary due to war time constraints.

During World War II - The College virtually comes to a standstill, but the postwar years see the enrollment of hundreds of “VA benefits” veterans and a growing list of course offerings. Five of the Abbey's priests serve as chaplains stateside and/or overseas in the U.S. Army or Army Air Force.

1959 - In June, the Benedictine Sisters of Saint Gertrude's Convent in Cottonwood, Idaho withdraw from Saint Martin's culinary and sewing departments.

1961 - A curriculum for girls is added to the High School.

1965 - In September, a public announcement is made that the College will enroll women in all of its programs. Father Michael quickly begins a search for a dean of women. Mrs. (soon to become Dr.) Elda Brophy is selected for this position. The monks elect Father Gerald Desmond as the new abbot in December. A student Union Building largely funded by the Associated Students organization (ASSMC) is erected.

1966 - Saint Martin's athletic teams become the Saint Martin's Saints.The striking three-story Burton Hall residence center is erected near the popular Baran Hall, housing up to 184 students and providing an apartment for the director of residence. Father Michael establishes an advisory Board of Regents to advise the College administration, staff and faculty as to the most effective ways of helping the College grow in quality as well as size.

1967 - The new Board of Regents' inaugural meeting takes place in the Student Union Building on campus and is chaired by Tacoma businessman Robert P. Mallon.

1968 - Saint Martin's much-needed and long-awaited health and physical education building, initially called the Capital Pavilion, is completed and dedicated in January. The men's basketball team makes its first ever berth to the NAIA District-One Championship.

1970 - The Abbey Church is completed and becomes the campus' most important building.

1974 - Saint Martin’s High School is closed due to declining enrollment.

1980 - The monks of Saint Martin's Abbey elect Father Adrian Parcher to be their sixth abbot. Classical music concerts are held in Abbey Church in observance of the 1500th anniversary of the birth of Saint Benedict.

1980 to 1984 - Dr. John Ishii serves as president of the University, becoming the first layperson to lead the Benedictine College in the school's eighty-five year history.

1982 - The Spiritual Life Institute is established under the joint sponsorship of the College and Abbey.

1985 - The Saint Martin's Athletic Foundation is established "to encourage and enhance the quality" of Saint Martin's intercollegiate and intramural athletic programs.

1986 - On May 23, the Abbey Chapter elects Father Conrad Rausch as the monastery's seventh abbot.

Saint Martin’s adds graduate programs in education, engineering and counseling psychology to its growing list of areas of study. The Institute for Pacific Rim Studies is also created, which is now known as the University’s Office of International Program’s and Development.

1991 - Seven Saint Martin's students and staff participated in a 10 day study visit to Japan in May and June.

1992 - The Benedictines of Saint Martin's approve a new Abbey mission statement as a means of restating their purposes and goals. On Aug. 6, the dedication of the renovated Saint Martin's Pavilion and the adjacent Norman Worthington Conference Center is held.

1994 - The Lady Saints win the PNWAC League. The Board of Trustees unanimously approve a new library fundraising program.

2001 - The O’Grady Library opens, providing students with much-needed resources. Designed by world-renowned architect Michael Graves, the library is now a signature building on the campus.

2008 – The first official men's and women's soccer teams are formed. The women's golf team makes its first NCAA Regional appearance. There are many changes to the campus, including:

The opening of Harned Hall, a state-of-the-art academic building, honoring H.C. “Joe” Harned; the dedication of a world-class track and field facility and the Jan Halliday ’89 Memorial Plaza

2011 - The name of the street guiding guests through Saint Martin’s main entrance is changed from 6th Avenue to “Abbey Way”— part of the transformation of the north campus.

2013 - The renovation is completed in the courtyard behind Old Main. As part of the Engineering Initiative, the new Father Richard Cebula, O.S.B. Hall, home of The Hal and Inge Marcus School of Engineering, opens and achieves Platinum LEED certification; it is currently the highest-rated LEED-certified educational building in the Western Hemisphere and third highest in the world. The softball team wins the GNAC Tournament Championship and makes its first NCAA Regional appearance.

2018 - The University announces a Science Initiative to build a new 30,000 square-foot building to house classrooms, labs and offices for biology, chemistry, physics and math. The men's basketball regular season team wins the GNAC Championship and makes its first regional appearance.