To travel is to begin to know 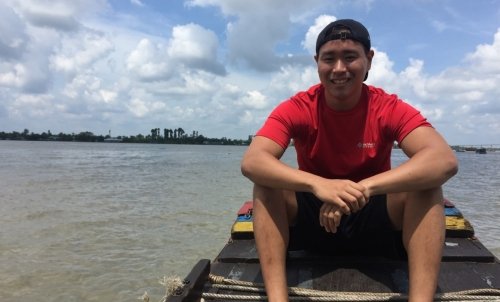 "I would like to challenge students to step out of their comfort zones and travel."

When I first heard about the short-term study tour to Vietnam, I was not interested. I naively thought, "Why would I want to go to Vietnam?" I’d already traveled as a student ambassador to Japan and Korea. It wasn't until Christmas break that I realized this was a golden opportunity.  When in my life would I actually travel to Vietnam with someone like Dr. Dinh, who speaks Vietnamese? When I changed my perspective, I knew this trip was a once-in-a-lifetime opportunity.

Because I’d traveled to Asia before, I considered myself a seasoned traveler. However, on the plane ride over to Vietnam I felt myself in unfamiliar territory. I did not know many things about the Vietnamese culture. Initially, I was apprehensive about the trip, but I was excited to visit famous cities like Hanoi, Nha Trang and Ho Chi Minh City (formerly known as Saigon).

Looking back at Hanoi, I will never forget the daily market right outside of our hotel. Every morning as we headed to our tour bus we would see people selling fresh fruits, vegetables and different kinds of meats. Chickens were being de-feathered, beef was being cut into chunks (probably for pho) and freshly caught fish were lined up on tables.

Aside from the open market, Hanoi's streets were almost entirely composed of motorbikes. Our tour guide said out of a city with 13 million people, 11 million rode motorbikes. Traffic was hectic but somehow it worked--it was controlled chaos.

Hanoi will hold a special place in my heart because it gave us the first taste of Vietnam. While in Hanoi, our group was able to see the Ha Long Bay, which was an extraordinary place. The bay itself was pretty, but surrounding the bay were beautiful rock mounds that majestically blended into the sky. My words cannot do it justice, but know that it is one of the Seven Wonders of Nature for a reason.

A couple days later we went to a place that many called “Ha Long Bay inland,” an area with a small river surrounded by beautiful mountains ranges on both sides. We rode in a small rowboat through the river and into three caves. The views were great, but what set this boat ride apart was the fact that the rowers used their feet instead of their hands. A short-statured Vietnamese woman was able to row two students on an hour-and-a-half boat tour. After that boat ride, we borrowed bikes and rode through the city and the rice fields. The scenery was gorgeous. Instead of seeing buildings and developments, you could see rolling mountains and grass for miles on end.

After a couple days in Hanoi, we took a plane to the touristy coastal city of Nha Trang, where we had time to enjoy the beaches and resorts. One day, all the students rented out two day-bungalows, and we "treated ourselves" to luxury. It started with a mud bath and then pool time, followed by a mineral bath and massages. Nha Trang was very different from Hanoi, but it was a nice change of pace.

Our next stop was Ho Chi Minh City. Much like Hanoi, the streets were chaotic. It was while we were in Ho Chi Minh City that we got to learn the most about the Vietnam War. We took a tour of what was the "Vietnamese White House" prior to the Communist takeover. We also went to the war museum where we learned about the harsh realities of the war for the Vietnamese people. On the last day, a bunch of us went to the Cu Chi Tunnels. It was there that we experienced what it was like for the Vietcong. We learned about their booby traps, lifestyle and we even got to crawl through one of their tunnels—it was an eye-opening experience.

To finish our last night in Vietnam, Dr. Dinh had us meet up with her cousin, an English professor at a local high school. Each Saint Martin's student was paired up with a Vietnamese student who took us around the city. It still amazes me how efficient and relatively safe those streets are, given how many people disregard the lane markings. The ride and experience were exhilarating.

The trip to Vietnam was everything I could've asked for and more. Dr. Dinh and Dr. Barosky were wonderful chaperones. The food was great, the people were awesome and the activities were unforgettable. Vietnam has such a rich and unique culture.

Saint Martin's University is a place of opportunity.  As a rising senior, I have noticed that the Study Abroad office is one of those opportunities that is oftentimes overlooked. I would like to challenge students to step out of their comfort zones and travel. College is a time for people to grow—and traveling definitely enhances the experience.