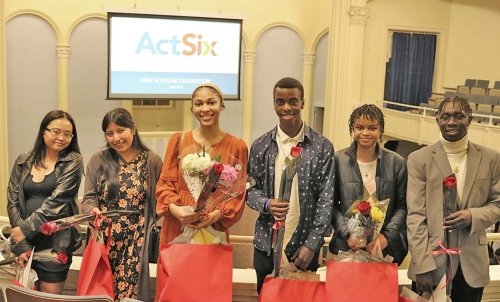 Selected through a rigorous three-month competition from 2,000 applicants, these diverse student leaders were among 19 finalists who were invited to interview for the scholarship. The scholars were selected for their distinctive leadership skills, academic potential, and commitment to making a difference in their communities.

The fourth cadre of Saint Martin’s Act Six Scholars include:

“Selecting the next Act Six Cadre is one of the most rewarding parts of the year,” said Saint Martin’s dean of admissions and enrollment Patty Lemon. “Each scholar brings their talents and passion to Saint Martin’s. Cadre 4 members each shared the importance of the bonds and relationships in their lives and how these relationships shaped their own leadership journey. We are blessed to welcome these scholars who will make a difference on our campus community.”

The Act Six network is a leadership development and scholarship initiative led by Degrees of Change that identifies, trains and supports the region’s most promising urban students as transformative campus and community leaders.

Act Six connects local faith-based community affiliates with faith- and social justice-based colleges to equip emerging urban and community leaders to engage the college campus and their communities at home through a simple but powerful four-part strategy: Recruit and Select, Train and Prepare, Send and Fund, and Support and Inspire. Since 2002, Act Six has trained over 1,200 scholars from seven cities for 17 private, liberal arts colleges. Please visit Saint Martin’s University’s Act Six page for more information.

Saint Martin’s University is an independent, four-year, coeducational university located on a wooded campus of more than 300 acres in Lacey, Washington. Established in 1895 by the Catholic Order of Saint Benedict, the University is one of 13 Benedictine colleges and universities in the United States and Canada, and the only one west of the Rocky Mountains. Saint Martin’s University prepares students for successful lives through its 29 majors, 11 master’s programs, one doctorate program and five certificate programs spanning the liberal arts, business, education, nursing and engineering. Saint Martin’s welcomes more than 1,300 undergraduate students and 250 graduate students from many ethnic and religious backgrounds to its Lacey campus, and more students to its extended campus located at Joint Base Lewis-McChord.