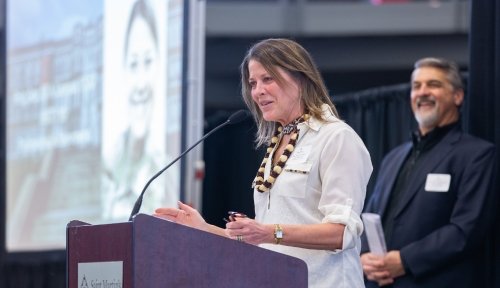 Saint Martin's Distinguished Alumni Awards are bestowed upon alumni for outstanding service to Saint Martin’s, to their local communities, or for incredible professional achievement in their field. These men and women are awarded with honors for exceeding societal expectations, breaking the mold, and helping to make the world a better place.

See all past distinguished alumni Nominate a Saint

On February 8, 2022, Saint Martin's University inducted eleven new members as the 2022 class of Distinguished Alumni. Each in their unique way has inspired leadership, service, and professional success that has transformed the lives of others. Their bios are listed below.

Interested in being more involved with the Distinguished Alumni Awards? Consider joining the Saint Martin's National Alumni Board!

Since graduating from Saint Martins, Tommy has spent his entire career in education to help students obtain a quality education leading to a better future. Upon his retirement, Tommy continued this challenge by being a conduit for Saint Martin's University to the Hawaiian Islands. He assisted in building relationships with SMU admission personnel to various high school college counselors on Oahu, in addition to the athletic department with quality athletes. Tommy schedules school visits, participates in college fairs, and helps link financial aid support systems. Tommy and fellow alumnus Art Fillazar '73 created the Aloha 808 Hawaii Chapter. This community assists in spreading current school news to past alumni in Hawaii, keeping them in touch with their classmates and the school. It is their contribution to the belief of "Once a Saint always a Saint."

Recognized for: Service to Community

Bob Basich graduated from Saint Martin’s College in 1949 with a BA in Education and earned his Master’s Degree from the University of Oregon. Bob was inducted into Saint Martin’s Hall of Fame in 1992 for his excellence on the football field. A WWII veteran, Bob was a passionate educator in Washington State History and Government for junior high and junior college. After retiring, Bob served as a city councilman for Aberdeen and later served six terms in the Washington State House of Representatives. In 1992, he received the Governor’s Proclamation and a House Resolution for 40 years of community service. Bob’s passion for life and service was richly exhibited as an athlete, teacher, coach, community activist, and family man.

Mike Cronk graduated Saint Martin’s High school in 1961 and later received his BA in Education in 1964. In 1985, Mike graduated from Harvard Business School Advanced Management Program. Mike was active in student government at Saint Martin’s and participated in numerous campus activities and was a member of the Board of Trustees from 2007 to 2011. Mike is a Legacy Society member, High School Class of ’61 Reunion Representative. Mike has been instrumental in the SMU Comprehensive Campaign Steering Committee and a crucial part of the Presidential search committee and a Trustee emeritus.

Dr. Richard Hecker began attending night classes at Saint Martin’s College upon transfer from Europe as an active duty Chief Warrant Officer (A.S., Baylor University U.S. Army PA Class #7 – 1975-1977) Certified Physician Assistant (PA-C) to FT Lewis in April 1980. He had prior Viet-Nam era enlisted soldier (1971-1975) experience as a Psychiatric Drug and Alcohol Rehabilitation Specialist prior to attending Physician Assistant training. He then received a recommendation for degree completion by the then FT Lewis Extension Director, Mr. Phil Carbaugh, to Father Placidus Reischmann, OSB, Dean of Biology, where he was approved for enrollment as a full-time student on Main Campus in January 1981. He graduated with a B.S. Degree in Marine Biology and a B.A. degree in Psychology from Saint Martin’s University in December 1981 through the Ft. Lewis Saint Martin’s College Extension. He was accepted into Medical School and selected by the U.S. Army as a Health Professions Scholarship Program recipient, where Richard became a U.S. Army Medical Service Corps Officer. Upon completing Medical School in May 1986, he was commissioned as a U.S. Army Medical Corps officer. He entered formal Graduate Medical Education Internship, Residency, and Fellowship training as a professional physician. He achieved Board Certification in Anesthesiology, Critical Care Medicine, and Pain Management. He currently serves as a Senior HIMS (Human Intervention Motivation Study) Aviation Medical Examiner for the Federal Aviation Administration in San Antonio, TX. He maintains an active office practice in San Antonio, TX. Dr. Hecker has served on the President’s Council as a Trustee, is a Founding Member of the University Gala, and was a Co-Chairman for the first three Galas. He has endowed two University Scholarships and was recently selected to act as an advisor to Saint Martin’s University Nursing Program. Richard remains active in his community in the service of medicine and aviation-related activities.

Bill received a Bachelor of Science in Civil Engineering from Saint Martin’s University in 1973 after serving in the US Army from January 1969 to January 1971. He was the president of Saint Martin’s student chapter of the American Society of Civil Engineers and Vice President of the student chapter of the Washington State Society of Professional Engineers. Further in his career, he oversaw the planning, design, permitting, super-fund site restoration and redevelopment of Tacoma’ Thea Foss Waterway waterfront and receiving the Outstanding Civil Engineering Award in 2005. He has proudly served on the all-volunteer Tribal Council since 1993 and served on the Native American Advisory Committee for the Washington State Historical Society. In 2008, Bill became the Chairman/COO for the Cowlitz Indian Tribe. Prior to retiring, he served on the Board of the Mount Saint Helens Institute, Board of the United Indians of All Tribes and the SW Washington Regional Transportation Commission.

Recognized for: Service to Community

Tamara graduated from Saint Martin’s University in 1995 with a Bachelor of Science degree in Civil Engineering. She earned a Transit and Community Transportation Management Certificate from the Executive Development Center, Atkinson Graduate School of Management at Willamette University. During her time as the Mayor of DuPont, she supported military families through a historical deployment. In 2012, Tamara was awarded and recognized as a recipient of the JBLM Civilian Hall of Fame Lt. Gen. Bill Harrison Service Award. She had twice been awarded the JBLM Excellence Award. Tamara currently works for Seattle City Light and leads four dynamic programs focused on public service. In parallel to her professional career, she serves as a foster parent and an animal-human bonding co-lead at local children’s hospitals, JBLM Red Cross, and Washington State Council of Firefighters Burn Foundation.

The Honorable Judge Richard A. Jones graduated from Saint Martin’s high school in 1968 and then received his Bachelor of Public Affairs from Seattle University and his J.D. from the University of Washington Law School. He has been a United States District Court Judge in Seattle since his appointment to the federal bench in 2007. He previously served as a judge on the King County Superior Court, Washington, from 1994 to 2007. In 2008, Judge Jones was awarded an Honorary Doctor of Humane Letters degree from Saint Martin’s University. In May 2016, he received the Ellis Island Medal of Honor in New York City. That same year, he was named the recipient of the Charles E. Odegaard Award by the University of Washington’s Office of Minority Affairs & Diversity for his commitment and dedication to social equity and educational opportunity. Most recently, in May 2019, Judge Jones received the American Bar Association’s Diversity Leadership Award.

Rick has a decades long relationship with Saint Martin’s University. His leadership and service are apparent in his years on the Board of Trustees, where he has served two terms as chair, and as a chair for the Comprehensive Campaign. He has also been a chair or committee member for Saint Martin’s Gala, A Winning Spirit Campaign, the Science Initiative, and the Engineering Initiative, which established the Panowicz Foundry for Innovation. Rick’s commitment to Saint Martin’s mission and legacy has been vital throughout the years, and as a result, he received an Honorary Degree from the University in 2020 and is a recipient of the Martin of Tours Medal. Before retiring, Rick was president and CEO of Tab Northwest, a filing systems and computer products company. Rick is passionate about charity work, higher education, and giving back to the community.

Mark earned his BA in English and American Literature from Saint Martin’s College in 1969 and a master’s degree in English Language and Literature/Letters at Georgetown University. Mark was an early contributor to the Benedictine Institute at Saint Martin’s University. He served with the U.S. Army National Guard from 1970-1975. Mark started his professional career as a trainee at Brooks Brothers in New York City, eventually becoming a Divisional Merchandise Manager for men’s sportswear. He then worked as the Senior Men’s Merchandiser at the Orvis Company for 23 years. On retirement from Orvis in 2014, Mark used his work experience and expertise to launch his international sourcing and apparel design business, Templeton & Associates LLC. Mark’s career successes and community involvement are genuinely inspiring for Saint Martin’s students.

Fr. Bertrand Trautman, O.S.B. graduated from Saint Martin’s High School in 1936 and received his BA in 1941. In 1942 Fr. Trautman made his solemn vows to Saint Martin’s Abbey, May 31, 1945 – Ordained Priest (Feast of Corpus Christi). Thanks to fundraising efforts by students, Fr. Trautman went on to receive his Doctorate in Political Science, Harvard University in 1957. Fr. Trautman became Dean of Residence and a faculty advisor. In 1965 the headquarters to the Office of Campus Life was named after Father Bertrand Trautman as the Trautman Student Union Building (TUB). As the Academic Vice President from 1965 to 1968, Fr. Trautman attended various conferences of northwest Catholic colleges with students. Fr. Bertrand Trautman became Chaplain at Saint Placid Priory and was once Assigned to Visitation Parish in Tacoma. In 1971, Fr. Trautman was appointed to the Board of Trustees.